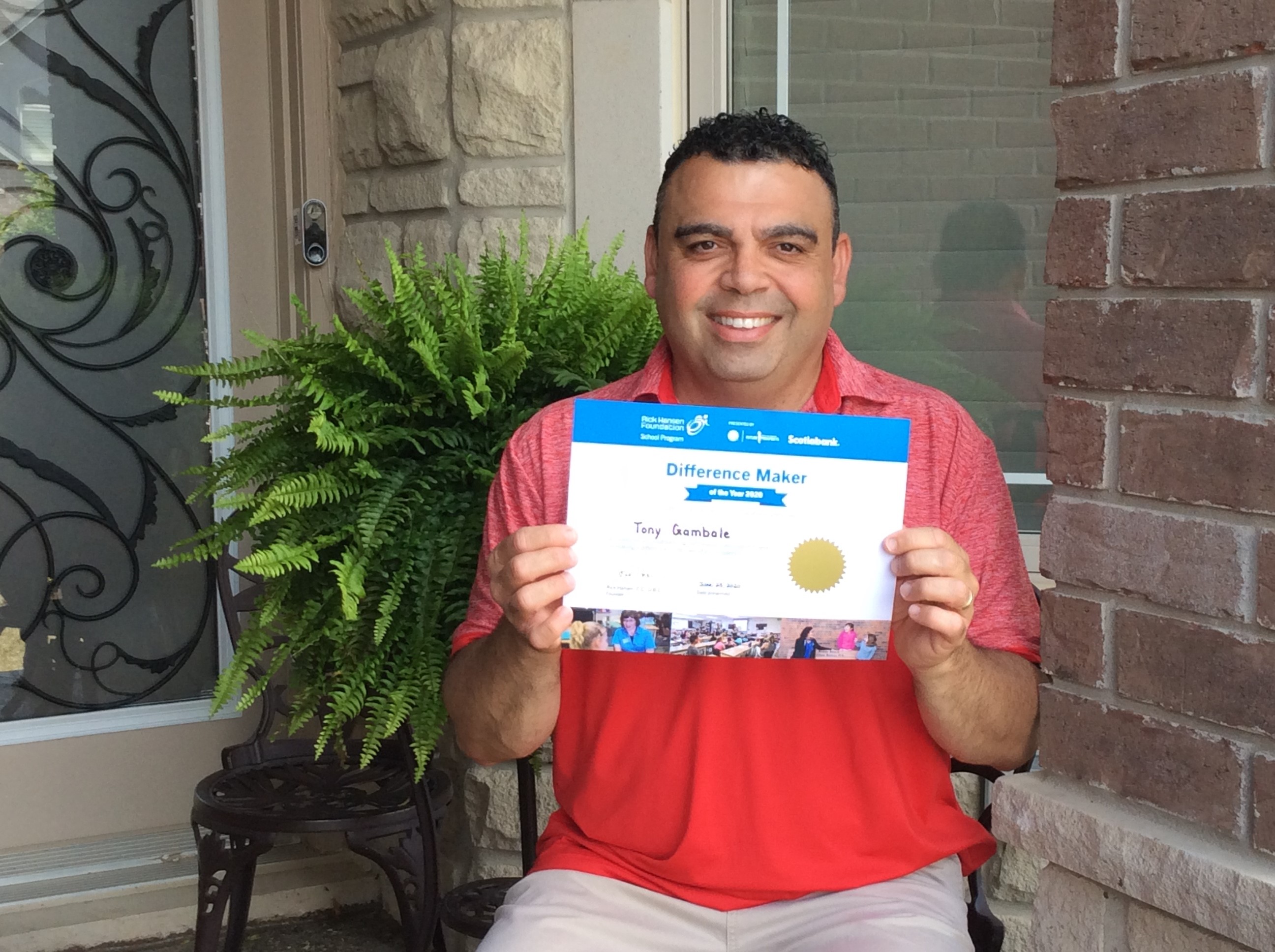 If Tony Gambale had become a lawyer instead of a teacher, as he once intended, the lives of countless students would not have been impacted in the same way. He studied French and Political Science in university with the intention to pursue a law degree, and describes always having had an interest and appreciation for human rights. But the pull to become a teacher was too strong to ignore.

“Tony taught me the importance of truly knowing your students and going the extra mile for them,” says Chelsea Weir, Tony’s nominator, and a former Brock University education student to whom Tony was assigned as an associate teacher. “Alumni from Blessed Trinity (where Tony teaches) would come visit him on an almost weekly basis, always bringing him a Tim Horton’s coffee with triple milk.”

One area Tony has made a sizable impact in educating students about accessibility and inclusion is Indigenous issues. When a First Nations colleague, Keith Bomberry, extended the first of several invitations for Tony to join his class on field trips to places such as the former Mohawk Institute Residential School, what he experienced there had a profound impact on him.

“That first trip shocked me. It resonated with me,” Tony says. “The way Mr. Bomberry talked about the history and his lived experience — seeing the name “Bomberry” inscribed on one of the bricks where survivors had written their names — made me the teacher I am today.”

Knowing he would someday move on to a new posting, Mr. Bomberry asked “Mr. Gambale” if he would take over teaching students at Blessed Trininty about Indigenous history and issues when that day came. Tony was humbled.

Tony has been instrumental in encouraging students to celebrate diversity. In addition to being the faculty lead at his school on initiatives like Orange Shirt Day for Indigenous Peoples, Black History Month, Indigenous Peoples’ Day, and the Social Justice League, Tony developed the concept for a task for Grade 12 students that involved having them demonstrate their learning about Indigenous culture by recounting their own parable (a simple story used to demonstrate a moral or spiritual lesson) in a sharing circle. Many demonstrated incredible vulnerability connecting their learning to personal experiences. As the feather was passed around the circle to each student so they could share what they learned from each parable, it was clear the students had deepened their empathy for Indigenous people, and for each other.

Another testament to Tony’s impact on those he teaches is in the gift he received from his student Aaron Parry, who started the Social Justice League at Blessed Trinity and received a Lincoln Alexander Award for his work promoting equity. Aaron gave Tony a copy of Hiawatha the Peacemaker, with an inscription on the inside cover that drew parallels between their friendship and Hiawatha’s journey. “I took the book home and hadn’t read the inscription yet,” says Tony. “My mother, who was visiting, called me into the kitchen crying, implored me to read what Aaron had written. Then we both lost it.”

With his retirement from teaching on the horizon, being named a Difference Maker of the Year is icing on the cake for Tony. “I remember seeing Rick come through Glendale on the Man In Motion World Tour and just being in awe of him,” he says.

“To receive this award, and for the community and local media to celebrate it with me the way that they have, has been amazing.”