Spencer van Vloten is a recipient of 2022’s Rick Hansen Foundation School Program (RHFSP) Difference Maker of the Year award! The recipients are students, teachers and community youth leaders who made positive contributions to inclusion and accessibility for people with physical disabilities during the 2021/2022 school year, either in their school, greater community–or both! 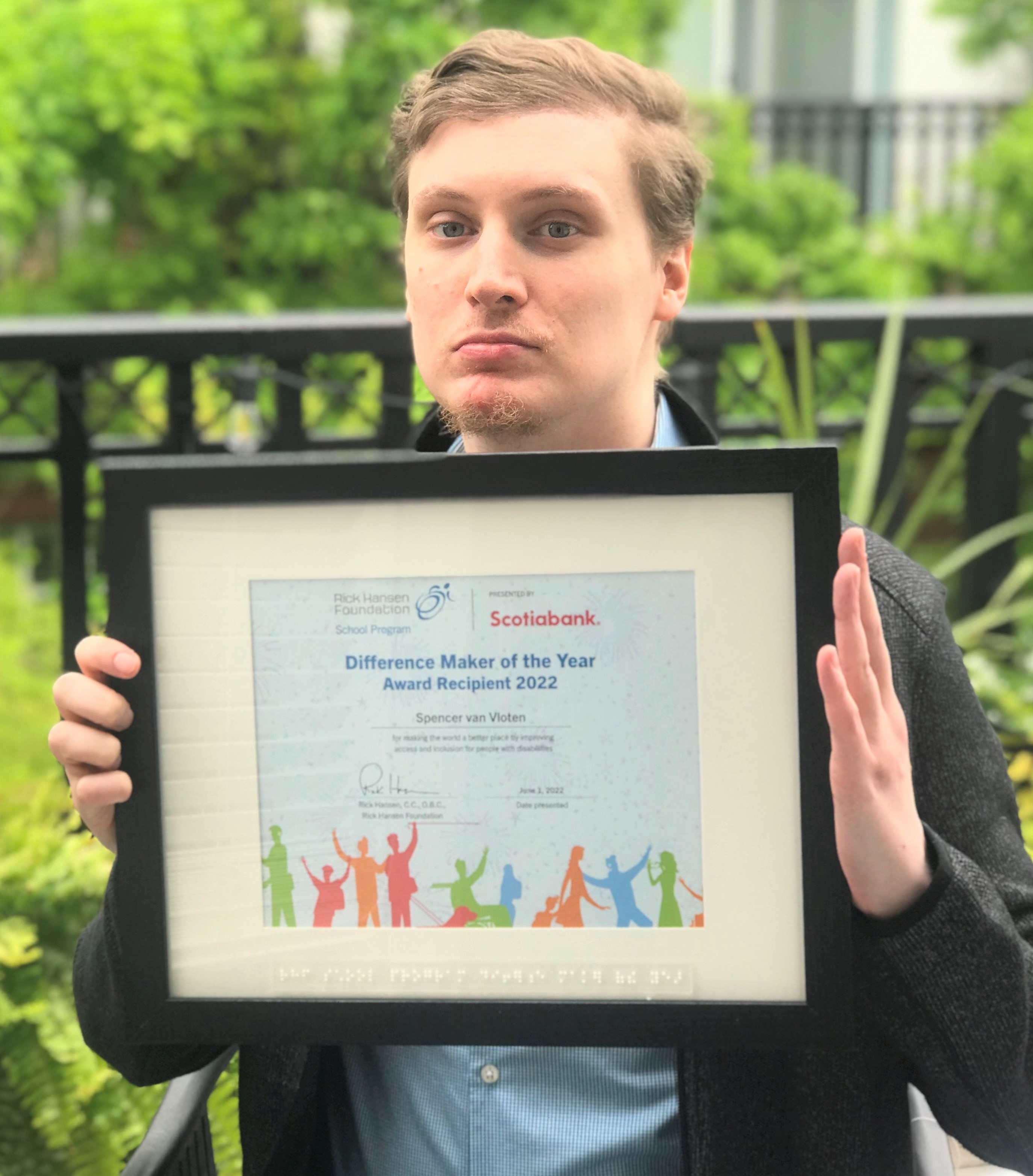 Spending the majority of his life in Vancouver, van Vloten has volunteered as a youth leader with organizations such as the Easter Seals BC, community organizations for youth new comers to Canada, and currently chairs a committee for Community Living BC – an organization that supports adults with developmental disabilities. He is involved with youth leadership and advocacy for people with disabilities and is the creator of the resource-based website, BCDisability.com.

Advocating from a young age

Advocating for accessibility and inclusion has been close to van Vloten’s heart from a young age.

“I have a relative who has cerebral palsy,” van Vloten shares. “He’s in a wheelchair and has very limited mobility. Growing up we’d visit pretty regularly and I’d get to hear the stories of what he faced on a daily basis. And just being out and about with them I’d see the barriers he faced that were predominately physical barriers, but then these physical barriers created mental barriers within himself.”

Van Vloten explains how barriers in the built environment began to negatively shape the way his relative viewed his own capabilities, and made him feel like society “wasn’t made for him and didn’t want to include him.”

“It was really noticeable to me that any barriers [physical or attitudinal] really reduce a person’s sense of power and agency and capabilities in society,” he says.

“There was such a change in his personality. He was so much more confident, and he started believing that things could change for the better,” he shares.

Noticing the impact accessibility and inclusion had on his relative, van Vloten became inspired to help empower others in the same way.

“From an early age, that really showed me the power that accessibility and inclusion has. It has the power to hurt people when it’s not there, but the power it has to give that sense of agency when it is. That’s why I’ve been involved with these various initiatives, programs and leaderships,” he says. 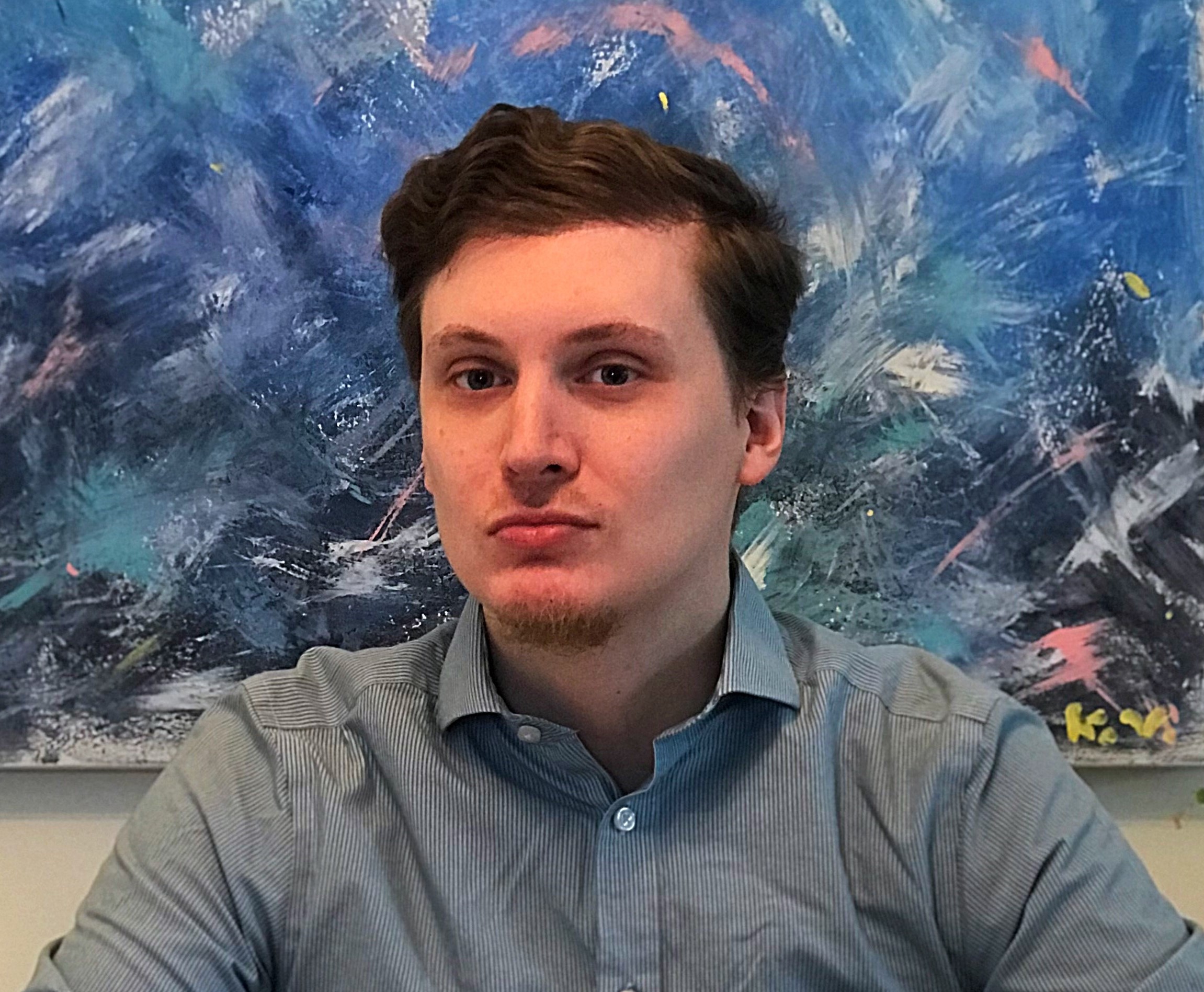 Empowering the next generation

Van Vloten has since been dedicated to advocating for people with disabilities, particularly through uplifting youth.

“The earlier you can uplift someone, the earlier you can remove barriers that they’re facing to full community participation, the more you will establish within them the sense of inclusion within society, and that they can make a difference,” van Vloten shares.

One of his efforts included enabling youth with physical disabilities to be a part of the City of Vancouver’s accessibility consultation process.

“The more young people [with disabilities] that are involved with shaping policies around accessibility and that lead conversations around community inclusion, I think the more progress we’ll make,” van Vloten says. “They bring a renewed energy to the discussion.”

Van Vloten says he hopes to create a shift in the way society thinks about accessibility, and to think about people rather than just situations.

He says others can help make a difference, too, by looking at the core reasons why accessibility barriers exist, acknowledging the barriers that might go unnoticed to someone who does not have a disability, and advocating for change when you see a barrier in society.

“Be mindful of your surroundings and if you see something that is creating a barrier, point it out to the appropriate person. We need to make this just a normal, integrated part of our lives.”

As a Difference Maker, Van Vloten shares that his ultimate goal is to empower people with disabilities to feel like they have the power to make change within society to make it more inclusive for all.

Made possible by the generous support of Scotiabank, the Gordon and Ruth Gooder Charitable Foundation and the Skidmore Foundation.